A New Vision for Outdoor Learning

The original kindergarten—the children’s garden—conceived by German educator Friedrich Froebel in the 19th century, was a place where children learned through play, often in nature. That idea is fast eroding. Children aren’t playing in the garden anymore; instead they’re filling in bubbles on worksheets.

Kindergarten is the new first grade. Its teachers are required to focus on a narrowing range of literacy and math skills; studies show that “some kindergarteners spend up to six times as much time on those topics and on testing and test prep than they do in free play or ‘choice time,’” writes journalist David McKay Wilson in the Harvard Education Letter. Instruction is teacher-proofed as teachers are required to use scripted curricula that give them little opportunity to create lessons in response to students’ interests. Many schools have eliminated recess or physical education, depriving children of the important developmental need to move and exercise. The efforts to force reading lessons and high-stakes testing on ever younger children could actually hamper them later in life by depriving them of a chance to learn through play.

In the face of this indoor-ification of early childhood, a cultural and educational movement is emerging—focused on new approaches to nature-based education. This movement offers us a glimpse of what childhood used to be, and still could be—the modern re-creations of the children’s garden: the nature preschool and the forest kindergarten. If we looked to these examples, we might be able to rescue childhood. 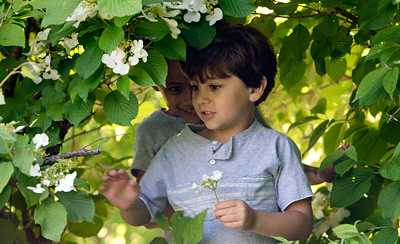 The nature-based education movement offers a solution to the eroding idea of Kindergarten.

Jenny Merrill in the Golden Jubilee edition of The Paradise of Childhood (1916) describes what exemplary curricula were like in early 20th-century kindergartens, including “observation of the sun, the moon, the stars, the sky, the clouds, rain and snow … shadows indoors and out-of-doors … care of living animals, [such as] a kitten … learning names of natural objects.”

The nature preschools and forest kindergartens of today aspire to this same kind of nature immersion. But, in their purest form, they go even further: Some forest kindergartens have the children outside 80 to 90 percent of the time. Many of the more than 700 Waldkindergartens in Germany have no heated indoor facility—just a tool shed or maybe a teepee, outdoor toilet, yurt, or open-sided shelter with a fire pit.

On a November day, I visit the Waldkindergarten on the Natick Community Organic Farm, outside of Boston. It’s below freezing, so children arrive bundled up in snow pants, down jackets, winter boots, and wool hats. The children meet their teachers at a bread oven adjacent to the farm administration building. They never go inside, and when everyone is there, they trundle back into the woods. On the way some get distracted tossing sticks into a marshy stream. One teacher takes the time to linger here while the other children and teachers head around the corner.

The outdoor classroom is a sun-dappled acre of towering pines with smaller, scattered oaks. There are a couple of log circles, a low balance-beam structure, some homemade hobbyhorses, and a “bakery”—a sandpile with lots of kitchen equipment, a digging pit, and child-sized rough-hewn tables. The centerpiece is a storybook cottage with a steep-pitched roof. I wonder when we’re going to get out of the cold. But we don’t. (Director Regina Wolf Fritz explains, “The cottage sells the program to parents, but I’m always clear that we spend about 90 percent of our time out in the forest and only about 10 percent inside the cottage.”) Instead, the children convene in a circle on the ground and sing chants and rhymes.

Then they move into “forest gnome jobs”—tidying up the bakery, preparing snacks, collecting kindling, raking the outdoor block area. This morphs seamlessly into forest play. Children dig in the clay pit, continue to chop up apples for snacks, or huddle at the base of tree trunks and whisper, giving voices to acorn creatures. I watch four boys play for about 20 minutes on a swing suspended from a wire between two pines. One boy winds up the swing, round and round. “OK, it’s ready,” he announces. Everyone piles on, a couple on the seat, two more standing, a tangle of arms, legs, scarves. The swing unwinds slowly, then faster, spinning the boys in a blur. When the spinning stops, the boys tumble off, and some of them roll down the leafy slope below. One jumps up, “Now we need to spin it up again!” They’ve got an endless appetite for rough-and-tumble play. 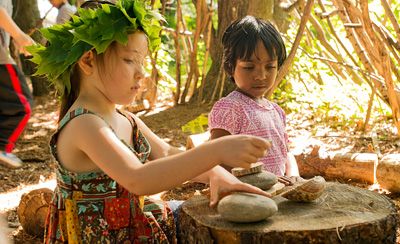 I visit the Dodge Nature Preschool on a sunny September day. It is designed to look like a cottage in lake country. Just inside the front door, there’s a family area around a fireplace with comfy Craftsman couches and overstuffed pillows. Each classroom has lots of nooks and crannies that support different kinds of activities, a plumbed table that allows children to play with water, numerous windows, and direct access to the outdoors. During the first part of the morning some children build with blocks, others make paper dolls, a few make believe they are dinosaurs. There is a healthy snack of apples, crackers, and honey followed by reading aloud from a picture book about the wind and play-acting based on a story a child dictated that morning.

For outside-time today, the children and teachers trundle over to the farm to pick out some new chickens for the tiny coop on their playground (A fox killed the previous occupant.) The teachers scoop up hens and slide them into willing children’s arms to test the chickens’ amenability to being handled. These children have hands-on contact with animals on a daily basis. 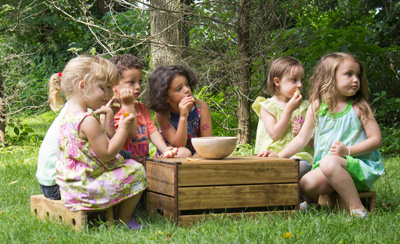 Nature Preschools bring elements of the traditional indoor classroom outside.

What happens when such carefree kids, who have never sat at a desk, arrive at a conventional school at the age of six?

Wendy Banning and Ginny Sullivan address this issue in their book, Lens on Outdoor Learning: “The many skills children develop through play, particularly the self-control practiced and refined in imaginary play, are related to long-term academic achievement.”

Many physicians have also begun advocating for open-ended, free play. In an article in the Archives of Pediatric and Adolescent Medicine, Hillary Burdette and Robert Whitaker write, “The problem-solving that occurs in play may promote executive functioning—a higher-level skill that integrates attention and other cognitive functions such as planning, organizing, sequencing, and decision-making. Executive functioning is required not only for later academic success but for success in those tasks of daily living that all children must master to gain full independence, such as managing their belongings and traveling to unfamiliar places.”

Outdoor play can also remedy behavioral problems. In a new film about a Swiss forest kindergarten—School’s Out, by producer Rona Richter and director Lisa Molomot—a pediatrician notes that he sees lots of children with attention deficit disorder in conventional indoor preschools but none in forest kindergartens. Perhaps this is what Erin Kenny, founder of Cedarsong Nature School on Vashon Island, Wash., means when she writes, in her book on forest kindergartens, “Children cannot bounce off the walls if we take away the walls.”

In a 1998 article in the International Journal of Environmental Research and Public Health, the authors describe a study that tracked three classrooms of children from preschool into adulthood: Children from a preschool class that spent just two percent of its time in free play were more likely to engage in misconduct at age 15 than those from two classrooms that had spent more than 20 percent of preschool time playing. By age 23, the group that had played less as toddlers had more arrests and was more often suspended from work.

Free play leads to lower arrest rates! Now that’s a selling point if I’ve ever heard one. Let’s do the math. The average yearly cost of a three-day-per-week program at a forest kindergarten is about $5,000. The average cost of a full year of incarceration in the United States is about $31,000. Forest kindergarten sounds like a good investment to me.

Of course, one of the big issues for parents is the gung-ho, outdoors-in-all-weather, children-coming-home-muddy-and-wet-every-day orientation of lots of these programs. After three or four hours of being outdoors with children, on that chilly day at Natick, I was ready to get in my car and crank up the heat. It took me a while to vanquish the shivers. Would I really want my own children doing this two or three days a week?

There is no bad weather if you're wearing appropriate clothing.

Paul Doolan, a dad who sent his daughter to a Swiss forest kindergarten, articulates on his blog the difference between the adult and child perspectives on rain and cold.

One day she came home from a day of particularly vicious downpours, her feet inevitably soaked, her eyelashes caked in mud, her cheeks ruddy with the cold and her eyes sparkling with fire, and I said to her it must have been tough being outside all morning in such weather. She looked at me in genuine incomprehension, looked out the window: ‘What weather?’ she asked.

Isn’t this what we want for our children? This immersion in the natural world, this feeling-at-one-ness, these eyes sparkling with fire. We’re learning that grit and stick-to-it-ive-ness are some of the core character traits that determine success in school and in life. Teachers and parents of children in nature preschools and forest kindergartens are finding that mastering puddles is just as important as learning letters in preparing children to find their way through the smart board jungle.


This article is adapted from Chapter 2. Reprinted with permission from Yes! Magazine, Spring 2014. 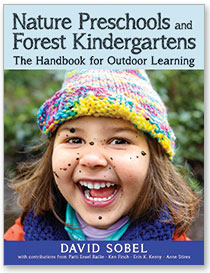 David Sobel is senior faculty in the Education Department at Antioch University New England. He is the author of several books and numerous articles on children and nature including the best selling Childhood and Nature. He previously served as director of CO-SEED, a project creating partnerships between school districts and environmental organizations, and was named one of the gurus of environmental education by Teacher magazine.