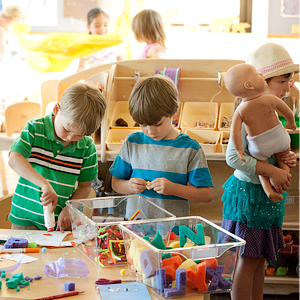 "They’re only mean for pertection!" Dylan stubbornly defended the zebras. The small plastic zoo animals were being relegated to two enclosures in the block area: the "scary" animals on one side of a wall, the “nice” ones standing in neat rows safely on the opposite side. The giraffes were lying in an unfortunate pile on the side: "They’re dead ‘cause they don’t stand up."

The rest of the room buzzed with activity as well. In the art corner oodles of lopsided hearts were being laboriously produced and inscribed with wobbly initials. A chaotic shopping scene was being reenacted in home-living, organized—as usual—by Mackenzie: "Let’s pretend I’m the mom and I’m telling what we’re doing! OK?"

What educational value is there in this typical cacophony of a preschool classroom? Are these 4-year-olds, who spend so much of their day in spontaneous play going to be prepared for the academic rigors of school?  According to Dr. Marcy Guddemi—and a whole lot of compelling scientific research—the answer is a resounding "yes." In fact, this very type of activity is the "foundation for future learning and success."  Read Article.