The Wisdom of Grandmothers

As two grandmas who have worked in the early childhood profession in many capacities over the last 30 plus years we want to share some of what we did, what we thought we knew, and where we have revised our thinking about caring for children. We think our Grandmas knew best. We submit our own 21st Century Grandmotherly Cautions here:

Has information overload confused our instincts about what babies need?

Today’s parents must make their way through the myriad of articles, books, conversations, and well meaning advice from friends, family, and even strangers, regarding the development and education of their children. Teachers are under state regulations and are also bombarded with an array of theories, philosophies, and policies that don’t always inform their practice clearly. Our parents and grandparents seemed to instinctively know about what babies needed. Has commercialism and information overload confused those instincts?

Through the insights of Jean Piaget we have come to view the infant as an involved person, one who experiences a wide range of intellectual and emotional abilities. Although they may appear to be helpless beings, babies are persons with feelings, rights, and an individual nature. Caregiving routines such as feeding, diapering, and playing are the heart of engaging with babies, but the challenge is to find ways to use these daily routines to interact, develop trust and security, and provide educational opportunities (Gordon and Browne 2007).

Piaget named the first two years as the sensory motor stage of development. He believed that children naturally rely on their sense perception and muscle movements to learn. They gradually learn that they can control the interactions between themselves and objects. They accommodate and assimilate new information gained from interacting on and with objects and people, using their senses and developing motor skills. They’re constantly taking in and adjusting to their environment (Gonzalez-Mena and Eyer 2014). This means they need the freedom of movement in the right environment to engage their whole body toward the work at hand.

Making Sense of the World

Sensory engagement, not overload, is what is needed.

Sensory awareness refers to using the senses to give the mind information. Vision is the dominant sense for young children. Visual awareness is the ability to mimic movements and to discriminate faces, emotions, sizes, shapes, and colors (Gordon and Browne 2007). It is the ability in three-month old babies to recognize their mothers. Auditory awareness includes the ability to understand and carry out verbal directions and to discriminate among a variety of sounds. Auditory skills help children to process information about language. From infancy, children seem to be able to combine visual and auditory awareness. Further sensory awareness develops through touch.

That said, it seems of late the child’s world has become bombarded with a myriad of unnatural sensory stimulation: blinking and bright lights, and loud music and sounds—literally a sensory integration overload. Many commercial constraints for children, including a new potty chair that has an I-pad insert for the toddler, offer a myriad of unnatural colorful and blinking lights and high pitched sounds. While it is important to provide sensory stimulation to children, it should be natural sensory stimulation such as sand and water play, classical music, children’s songs, and lullabies. Sensory engagement, not overload, is needed.

For example, Lois recently found a 100-year-old teething ring that belonged to her husband’s father. It was a simple, chunky ring with a flattened silver bell that the baby could chew on or manipulate. Depending on the baby’s ability to hold and move it, the toy would make a clinky-clunk sound—but not constantly nor jarringly. Current teething rings may be more stimulating than the child really needs. They just need something to chew on that gives more resistance than the fist. Developmentally, the need to suck and chew remains the same.

How do we close out a noisy and visually stimulating world? How do we eliminate strong lights and constant exposure to electric lighting? Our grandmas knew to use natural light as much as possible. Babies were placed outside in the shade to be able to gaze up at the leaves and speckled sun to gently drift off to sleep. Beyond a wind up music box or mobile, there were no electronics available to be offered.

Cramped spaces for babies such as play pens or other container apparatus, give little opportunity for gross motor development to unfold naturally. Advertisements for commercial constraints can cause parents and caregivers to believe these are what the children need. Children need movement opportunities on their own, not being propped up before they develop their spine and core strength. Children must use their bodies to learn motor skills as they acquire these skills and strength by being on the floor reaching, creeping, crawling and exploring.

Do we allow for enough freedom of movement for babies? Are we actually improving the children’s equipment or instead, creating an unnatural dependence on bigger, better, baby containers thinking that is best? What is the proper balance between placing children in convenient commercial apparatus and holding them, or setting up safe floor space for them to naturally explore and discover their world?

Here is a little poem that highlights what we want to make you aware of:

Babies need to be held
They cannot be ‘in something’ long stretches of time
They must hold up their heads and strengthen their spines.
Holding onto you, exercises posture and core,
And they learn on their own, when left on the floor.
While you move about, babies adjust,
Gain control of their bodies, no doubt it’s a must.

Car Seats are wonderful inventions to use,
While you’re out and about and shopping for shoes.
But…take babies out when you go into the house!
Development begins head first - spine down - trunk out.
Babies need un-constricted time to move about.
Baby seats, swings, commercial constraints
Risk limp muscled children with; “I’m tired” complaints.

Dr. Carla Hannaford, in her book Smart Moves: It’s Not all in Your Head explains the movement-thought link. As baby’s neck muscles strengthen, the child is able to lift their head to hear the world with two ears and start to see with two eyes. Being held upright with its body against the caregiver’s back or front, as well as lying on its belly on the ground, allows the baby to actively work and strengthen neck muscles. “This leads me to question the wisdom of excessive use of the popular baby carrying seats that double as car seats. These seats keep the baby at a forty-five degree angle that inhibits active muscular movements either of the neck or core muscles. The same is true for jumpers and carriers where the baby is facing out, away from the parent. Even though the baby’s eyes are forward, because movement is inhibited, the baby is not as actively developing vision” (Hannaford 2005,111).

Magda Gerber, a pioneer in infant care, coined the term educaring© to describe the relationship between an infant and an adult. Gerber’s philosophy is based on respect for babies. In that vein, she believed that babies are born knowing how to move and should not be placed in positions that they are unable to get into on their own (Solomon 2013, 120). We believe once the child can roll over on its belly the development proceeds and this need not be rushed. Hannaford wisely states that babies explore feet and hands with their mouth bringing the appendage muscles into play. The ears assist baby’s first attempts to rollover as it follows a sound with its ears and uses the core muscles to move the whole body. The core muscles then come into play as the baby strengthens the shoulder girdle area, by lifting the shoulders as well as the head, in response to sensory stimuli. With practice, first with one end of the body and then the other, the baby goes from scooching to finally being able to crawl. “We have known for years that children who miss the vitally important crawling state may exhibit learning difficulties later on” (112).

It is essential to the learning process to allow children to explore every aspect of movement and balance in their environment and keep them free from commercial constraints when they are simply not necessary. “Research shows that muscular activities, particularly coordinated, balanced movements, appear to stimulate the production of neurotrophins that stimulate the growth of existing nerve cells and increase the number of new nerve cells and neural connections in the brain. As we learn and master movements and skills, our brains require less energy and function more efficiently” (Hannaford 2005, 113).  We have discovered that boys need more movement time than girls for optimal brain growth and development. “The stress that comes from lack of movement in boys early on and during the learning process has inhibited important pattern development necessary for inner speech, formal reasoning and the ability to succeed in our current school curriculum” (Hannaford 2005, 114).

Take it from two grandmas, place babies on a blanket on the floor as often as possible and encourage movement and activity in your child. They will naturally lead you in this dance. 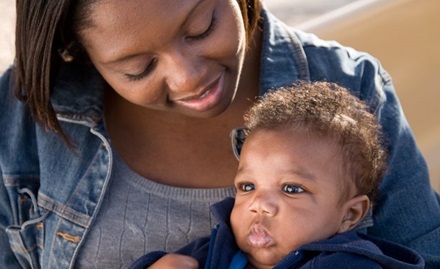 Birckmayer, J., Stonehouse, A. & Kennedy, A. 2008. From Lullabies, to Literature:  Stories in the Lives of Infants and Toddlers. NAEYC. Washington D.C. USA and Pademelon Press, Castle Hill, NSW, Australia.

Christ, T, and Wang, C. 2010. “Research in Review. Bridging the Vocabulary Gap: What the Research Tells Us about Vocabulary Instruction in Early Childhood.” Young Children. Vol. 65 No.4

Hannaford, C. 2005. Smart moves: why learning is not all in your head. Salt Lake City, Utah: Great River Books.

Lois M. Ingellis, MS Ed. has been an adjunct lecturer for Empire State College, Marist, Ulster, and Dutchess County Community Colleges. Currently she teaches several courses for ESC's Center for Distance Learning CDL. She taught infants, toddlers, preschool, pre-k, kindergarten and after-school throughout her 30 year career. She was a Head Start Teacher and Education Coordinator at Ulster County Community Action Head Start Program in the 80's. She was a teacher and Assistant Director at Vassar College Lab School. She is a proud grandparent of Alexander, Elizabeth, Charlotte, and Emmeline.

She can be reached at Lois.ingellis@esc.edu

Arlene Rider, Ph.D. has degrees in early childhood education and development. She has taught early childhood education and child development at Dutchess and Ulster Community Colleges, Marist College, and is presently with Empire State College, Hudson Valley Center. Arlene is involved with AfterSchool Works! New York and sits on the Early Childhood Advisory Committee for Dutchess Community College. She is often seen presenting workshops and trainings for the Child Care Council of Dutchess and Putnam Counties, Inc. and recently retired from the Mid-Hudson Infant Toddler Coalition. Arlene lives in Wappinger Falls, New York with her husband of 30 years, and has 4 children and 6 grandchildren.

She can be reached at Arlene.Rider@esc.edu