A Company Built on Unit Blocks

And to think it all started with the Unit Block. . . .

My father, Art Wiser, died this spring and I’ve been remembering the stories he loved to tell about where I was born. About hilarious escapades with unruly milk cows. About a spirit of camaraderie and joy in building a life that led to peace, not war. About the beauty of the Georgia hills and the poverty of their people. About hard, sweaty work by day and hard, searching thought by night. About how Community Playthings began.

It was 1947. Young pacifists fresh from Civilian Public Service internment camps had formed the Macedonia Cooperative Community in the Georgia Appalachians. Their families were growing fast and so were the debts. The dairy herd didn’t pay enough anymore and they needed more income.

At first they thought they’d raise broilers but the price dropped so low that the hungry community ate the chickens. Pulp­wood sold so cheap--$170 for an entire boxcar cut by hand and loaded in the Georgia sun--that it earned the name “starvation sticks.” Persimmon pies were delicious but hard to sell, especially when the salesman took an entire batch and was never heard of again. Another fast-talking marketer fleeced the young idealists of their beautifully designed and handcrafted furniture, spoiling the dreams of the would-be Shakers.

They were cheated and discouraged, but they also got good advice, advice that led in a straight line to the Community Playthings of today.  Milton Wend, who had been a science teacher at Caroline Pratt’s City and Country School, was sent to Macedonia by Clara Mayer, vice president of New School for Social Research in Manhattan. He introduced the struggling community to Pratt’s Unit Blocks.  The modular design, based on the 1⅜" x 2¾" x 5½" unit, opened up a completely new vocation for them. Now the little community had a product and a powerful connection to the field of early childhood education:  the concept of open-ended play.

Admittedly, Community Playthings wasn’t the first to sell Unit Blocks. That distinction probably goes to Frank Caplan of Creative Playthings. Neither was Macedonia endowed with much technical experience. The first lumber out of the dry kiln showed suspicious wet ovals in the ends of each board which quickly developed splits, spoiling the whole load. Machinery had to be improvised. There was so much to learn! 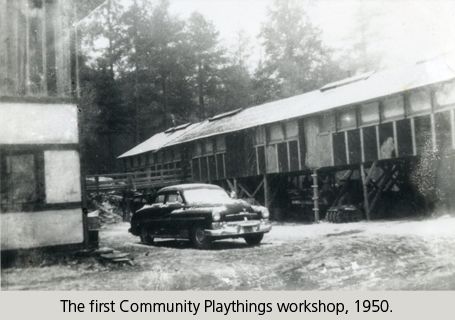 Their first attempts at marketing were story-telling fodder as well. They filled a Model A Ford called Lillian with blocks and sent Dad north to peddle them to the department stores in New York. Here’s how he told about selling to Wanamaker’s:

As I worked my way through the door as best I could, with the set of blocks on the little wheelbarrow and the table and chair set somehow under my arms, I hardly had a chance to look up at the buyer when she barked at me, “Where’s your tie!”

“Ma’am, I’m not a salesman. I only work in a little shop in Georgia.”

“Even southern salesmen wear ties!” Disgusted, she had the last word.

I laid some of the blocks on her desk and put the table and chair on the floor, with the wheelbarrow next to them. She picked up two of the double units and whammed them against each other, edge to edge, and held the blocks out for me to see. “Wood’s too soft!”

There wasn’t much I could say, but I muttered something about poplar being classed as a hardwood. It was lame, but it must have sounded a little authoritative to her, and she must have known that maple or even oak would have dented when struck that way.

She switched her attention to the table and chair. “Those are awful.” By then I was getting irritated, and retorted that my little boy liked them. The mention of a child melted her.

“Aren’t they wonderful?” I took it that she was talking about children now. “The rest of the world could go to hell if I could be left alone with my grandchildren!”

Then she turned and wrote down an order for six sets of blocks and a couple of the table and chair sets. We were in business!

A stroke of serendipity sent two teachers from Atlanta to visit Macedonia, possibly in early 1948.  Mamie Heinz, one-time associate secretary of the Association for Childhood Education International and author of Growing and Learning In the Kindergarten (John Knox Press, 1959), accompanied by her friend Evelyn Byrd, offered the fledgling business some valuable advice that steered Community Playthings on a course that we still maintain today. Nursery schools need industrial-strength equipment to withstand the rigors of group play, so please make a quality product. And please skip the department stores. Sell direct to the teachers and save on elaborate packaging and store discounts. We’ve been doing business by direct mail ever since. 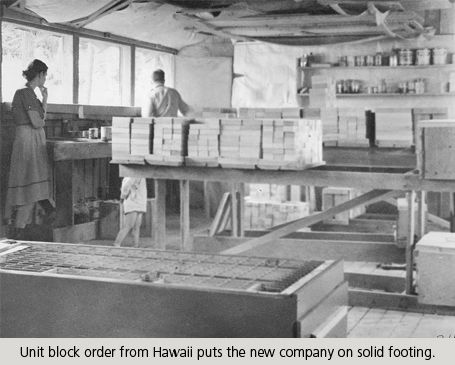 So Community Playthings was launched with solid advice from the field, a windfall order from—of all places—the Hawaii public schools, and sheer grit and chutzpah on the part of the Macedonians. When Macedonia joined with the Bruderhof to establish the first such community in the U.S., Community Playthings came with them. But that’s another story.

As an Early Childhood educator for many years, I have always extolled on the importance of the “block area” in every EC environment. I will share the wonderful articles in this newsletter with my coworkers and I particularly enjoyed the article on how it all began for Community Playthings. Continued success and best wishes for another 100 years with unit blocks

was born at the Macedonia Cooperative Community in Clarkesville, GA, where Community Playthings also began. Stories about the business taken with his breakfast porridge, along with a Bruderhof childhood and helping in the workshop, prepared him to look after product development for Community Playthings. Proud father of nine and grandfather, too, he lives at the Maple Ridge Community in Ulster Park, NY with his wife Maureen.