“You must know that there is nothing higher and stronger and more wholesome for life in the future than some good memory, especially a memory of childhood…” Fyodor Dostoyevsky (The Brothers Karamazov)

Close your eyes and think of your favorite childhood memory. When assigned this simple task, in my experience, most adults immediately come up with an answer that involves the outdoors. Sometimes the memories involve others, sometimes not. Not once has anyone mentioned a favorite television show. The rapid influx of new screen devices, phone apps, and other electronic entertainment targeted at children, however, is drastically changing childhood. Many children today are being deprived of those memory-making outdoor experiences in exchange for time spent indoors, controlled by a screen.

How can we help the children in our care begin to gather a trove of lasting memories of beauty and nature that they will carry with them throughout their lives? Let me offer a few suggestions and share experiences of important childhood memories being made that I have been fortunate enough to witness.

Even very young infants are mesmerized by the movement of trees and birds when brought outside. It helps them to develop both eye coordination and muscle control of their neck and back. As their hearing develops, they hear the leaves rustle in the trees, the birds singing, water running, and the wind as it gently blows by. Their sense of touch is encouraged by the feel of the breeze and the grass under their little knees and hands as they begin to crawl. I wonder what they think when they first smell that freshly mown grass, the leaf crushed underfoot, the damp earth? And of course, they will try to taste the outdoor environment as they taste everything, so please supervise well! As adults, we may not remember such experiences, but they develop deep foundations for memories to come.

I remember taking my eighteen-month-old granddaughter for a walk in the woods, allowing her to move along at her own pace. Suddenly she stopped, pointed at a red eft, and assumed what I call “the position of wonder,” which children naturally take to carefully observe items in nature. They spontaneously squat down and become quiet, still, thoughtful observers. They can maintain this reflective posture for a long time as they look at all of the smallest details. Are you aware of how much gold is on a red eft? I am not certain that I was until that day, as I observed the small lizard through the wondering eyes of my granddaughter. Do children sometimes explode with rapid movement and loud voices following this period of observation? Yes, they certainly do. It is an expression of joy in their observation! 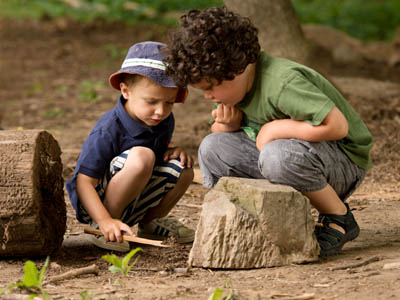 As children grow, excursions into the woods begin to involve their budding imaginations and language development. Words such as ice age, water flow, north and south, east and west, will naturally begin to seep into conversations. Gently sloping rocks become dinosaurs to ride. Fallen logs become horses. Children will continue to observe very carefully and also will begin taking small risks, such as climbing on the horse logs by themselves. When they fall off— as they inevitably will—their fall will only be a short distance onto the soft, forest floor and they’ll quickly brush themselves off and get back on. While having fun, they are actually learning one of life’s very important lessons, to take a thoughtful, calculated risk and deal with the consequences. They learn how to overcome barriers. They learn the joy of success.

The joy of success!

Taking risks can be more difficult for some children than for others. I often recall Megan who was a four year old in my nursery school program. She was a child who would not engage in art projects for fear of getting dirty. She was tentative in all things. One February day, following a rather large snowstorm, we headed outside to play in the deep snow. Megan was properly prepared with pink boots, pink snowsuit, pink mittens, scarf, and hat. After playing with the other children, I turned around and saw Megan just standing in the snow with tears running down her face. I asked her what was wrong, and she said she could not move. She could not play. She was afraid she would get wet, cold, and dirty. I threw some snow around in the air, reassured her she was well protected from the cold and the snow was not dirty—all to no avail. I was very frustrated. How could she experience the joy of playing in snow if she would not even try? Then I simply threw myself backward into the deep snow and made a snow angel. I sat up and there was Megan laughing—a deep belly laugh with those tears still hanging on her cheeks! We both threw ourselves into the snow, made snow angels, tossed snow in the air, and played for a long time with no more tears. Often we as adults have to remember how fearful some things appear to a child. If we take the time to show them the joy that we ourselves feel we give them courage to overcome that fear, to take a step forward. I often think of little Megan when it snows and throw myself down and make a snow angel. I hope that Megan is still doing the same as well! 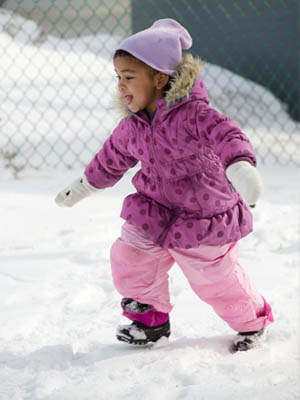 The joy of snow!

In my work with the Big Brothers, Big Sisters program, I agreed to lead a hike in the Catskills. We had great weather and a good turnout. Thirteen-year-old Josh, however, arrived with his head phones on, playing loud music. As he walked past me he firmly stated, “I don’t want to be here.” While I was taken aback by the belligerent tone, I simply said, “Thank you for joining us.” I realized that his adult buddy had not showed up, which may have made him feel unimportant and angry. His younger sister, Sarah, was a rather quiet and shy eleven-year-old. As we went along the trail through the forest and passed large boulders, I suggested she may like to try rock climbing. Sarah very shyly said she could not do that. I continued to encourage her, and finally, with my assistance, she climbed very carefully to the top of a rock. Sarah almost stood up, but then frightened, came right back down with a big smile on her face! I noticed Josh was watching. We stopped at the next rock and this time, on her own, Sarah climbed to the top and triumphantly threw her arms out to accompany that big smile. Josh slid the headphones down around his neck and suggested she should be careful. As we continued up the trail, Sarah continued to climb on rocks, gaining confidence with each climb. Soon, Josh was joining his sister in climbing rocks, suggesting hand holds and foot placements and triumphantly standing on top of three foot high boulders with her! And his headphones? He had placed those in his back pack long ago!

We enjoyed a great day in the woods. All the children and adults left with giant smiles! Josh left with a “thanks for bringing us” to me. I do not know the background of Josh or Sarah or how they came to be involved in the program. I do know that I saw an angry boy smile that day, and I was glad of that. The forest seems to be a place where one can take a risk, such as climbing a foot high rock, and where trial and error can occur without judgment. It is up to the user to problem-solve and to overcome the challenge. It is called gaining confidence. To see this brother and sister team gain confidence on this day was magnificent. The risk of having to read aloud a passage in class, of having to discuss a wrongdoing with an adult, will likely be made easier for these two children because of their “rock climbing” experience.

The following year, I planned the same trip with the Big Brothers, Big Sisters program. The first person out of the van was none other than Josh! He proudly came to greet me. There were no headphones in sight. He couldn’t wait to show me what he had in his backpack: some gloves for the kids to wear for rock climbing and some rope, “in case they were scared!” The belligerent boy from the year before was replaced by a young man who was a leader amongst the group. Was it because of “rock climbing”?

We will probably never know how these experiences affect the trajectory of a child’s life, but they have the potential to help form a solid framework of memories. So take time to take a child out in nature this week, and make memories filled with smiles that will last a lifetime!

is a mother, grandmother, and early childhood educator. She has a strong belief that children learn best through play, particularly when that play occurs in the natural environment. When not playing with her grandchildren, she can be found enjoying the outdoors.