The Gift of Wonder

“Wonder” and “extinction” are concepts I think about a lot as they relate to both my professional and personal life. Wonder makes life such a magical experience. Extinction, on the other hand, drains the magic from our everyday lives. Wonder takes us to the core of our existence; it enriches our souls. Extinction leaves a sense of emptiness and impoverishes our spirits.

A true sense of wonder can be considered a survival skill

But wonder and extinction are more than words or concepts to be played with in our minds. They’re serious realities that shape our experience of being alive. A true sense of wonder can be considered a “survival skill,” that helps us tap into our inner reserves and find strength to continue on when faced with challenges. Extinction however, leaves us with nothing to celebrate or to boost our spirits when things get tough.

Rachel Carson, renowned for her work as a biologist and conservationist, writes about young children, the sense of wonder, and extinction. Carson describes a child’s world as being “fresh and new and beautiful, full of wonder and excitement.” She refers to wonder as a gift—a gift she wishes for each child as they face the world. Wonder, is “an unfailing antidote against the boredom and disenchantments of later years, the sterile preoccupation with things that are artificial, the alienation from the sources of our strength” (Carson 1956). For many of us, our sense of wonder, beauty and awe is dimmed or even lost before we reach adulthood. This, I believe, is one form of extinction.

What can we do in our work with young children to see that life, for them, continues to be a source of wonder and delight? We can start by asking, “What do we notice, pay attention to, and celebrate? I’m reminded of the poem, “Fueled,” by Marcie Hans. In this poem, "everybody cheered" when a rocket "tore a tunnel through the sky" but "no one even clapped" when a seedling "pierced the heavy ceiling of the soil—and launched itself up into outer space". Does this failure to notice and celebrate the marvels and mysteries of the natural world represent a type of extinction? 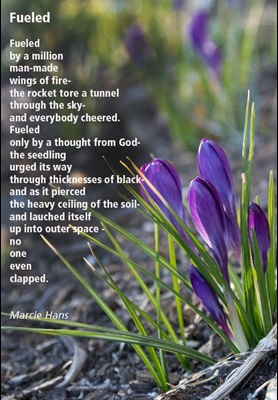 A child's growing sense of wonder is threatened in today's society by forces such as commercialism and technology. Academic pressures and a “too hurried” lifestyle crowd their way in as impediments to wonder as well. The more essential elements of a “good life” or a “beautiful life” for children and for adults are getting lost. A “good life,” means more than acquiring lots of goods, it includes keeping the sense of wonder alive. According to Rachel Carson, we need to cultivate an affinity for nature to “find reserves of strength that will endure as long as life lasts.”

Today, research from multiple fields of inquiry gives us empirical evidence of the many benefits we gain from engagement with the natural world. The online Research Library of the Children and Nature Network currently includes summaries of over 400 research articles focusing on the benefits of children’s connections with nature. Richard Louv, in The Last Child in the Woods, calls attention to the fact that children today are spending far less time outdoors being engaged with nature than they did in previous generations. Louv suggests that, for many children, this lack of engagement with nature results in a “nature deficit disorder” often displayed in such behavioral and psychological concerns as increased anxiety, depression, and attention-deficit problems.

What You Can Do

There are many nature-related activities you can do with young children to counteract the growing alienation from nature. The following suggestions are offered as starters.

1. Provide frequent positive experiences in the out-of-doors. Give children the time and place to explore and experiment with such natural materials as sand, soil, seeds, shells, water, and leaves. You might have the children raking leaves, sifting and carrying sand, washing stones, and sorting seeds. By adding some simple tools, you can encourage closer observation and extended explorations. Some inexpensive ideas include digging tools, hand lens, wind socks, rain gauge, rulers, clip boards and pencils, sorting trays, dippers, and buckets.

2. Engage the children in caring for plants and animals. Indoor plants and pets are fine, but it’s even better to engage the children outdoors. Consider working with the children to provide habitat for wildlife. You can do this by setting up a bird bath or bird feeder. You might also plant a butterfly garden. It’s also important to show children how to relate to other living things in a gentle and caring way: water the plants; avoid breaking branches or stripping bark from trees; and avoid disturbing the homes of birds and bugs. If you collect an animal from outdoors for closer observation (such as a snail or beetle), return it to its natural habitat within a short period of time and explain to the children why this is important.

3. Call attention to and celebrate the wonders of the seasons. Art-related activities work well for celebrations. Make drawings of seasonal changes or collect natural materials and make a collage. Celebrate the harvest by preparing a feast with fresh foods and using natural materials to decorate the table. Also remember to clap your hands and have a party when the first seedlings appear in the garden.

4.  Encourage playful identification or imitation of animals. Animal puppets, costumes, or other simple animal-related props can help in strengthening children’s connections with animals. Have children become birds, squirrels, ladybugs, or other favorite creatures, and then watch what happens. Children begin thinking about what their animals eat, how they move, where they live, and how they protect their young. Such thinking soon evolves into ecological perspective taking. How would my animal feel when it’s running through the grass or swimming in the river? When does my animal feel safe or frightened? Perspective taking is the foundation of caring and empathy. It’s also critical in the development of social emotional competence.

5. Use poetry to help children tune in to the beauty and wonder of nature. Just as the poem “Fueled” can help us, as adults, be more aware of and responsive to the wonders of nature, so other nature-related poems can do the same for young children. One of my favorite poems to use with young children is “Who Has Seen the Wind?” by Christina Rossetti. I like the way this poem introduces children to the idea that some things we experience are real even though they can’t be seen. This idea tends to be intriguing to young children. After reading the poem “Who Has Seen the Wind” and participating in some follow-up discussion, children can often identify other realities they’ve experienced but have never seen, like the sweetness of a strawberry or the softness of a kitten’s fur. Nature-related poetry can help young children become better observers of the natural world. It can also help them develop a deeper appreciation of the beauty and mystery of the world in which they live.

Let's not forget to give children the gift of wonder.

We all want what is best for each child. We want to give them what will make them grow and thrive. We generously give of our time and our attention. We plan each day with care and select materials that we hope will excite their curiosity and creativity. We hold their hands and guide their steps. We wipe their tears and listen to their stories. These are all beautiful gifts that can’t be wrapped with paper and ribbon. Let's not forget to give the children in our care the gift of wonder. We can give this gift to ourselves, as well, and in the sharing of wonder their lives and ours will be enriched—not just for today—but for many years into the future.

Dr. Ruth Wilson works with the Children and Nature Network as curator of their Research Library (www.childrenandnature.org/research-library/), an online resource of scientific literature relating to children and nature. She recently completed a new edition of her book, Nature and Young Children, 3rd edition, (https://www.routledge.com/9781138553347), which addresses the importance of nature in the lives of young children. Dr. Wilson can be contacted at wilson.rutha@gmail.com.