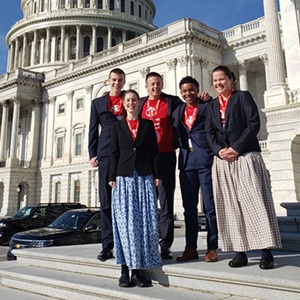 The strength of more than 200 voices reverberated on Capitol Hill this month– voices raised on behalf of kids around the world in meetings with nearly 150 lawmakers and their staff.

The meetings were the culmination of the three-day 2019 Advocacy Summit, where Save the Children Action Network (SCAN) advocates from more than 35 states attended in-depth advocacy trainings, heard from leading experts on issues impacting children, and convened with their legislators to protect and invest in kids both here at home and overseas.

All of us were so pleased that Community Playthings sponsored our Congressional Breakfast on April 2, where we honored our Congressional Champions for Children. John Huleatt, General Counsel for Community Playthings, was eloquent as he encouraged all our advocates, including students from Bruderhof’s The Mount Academy, to tell their elected officials why we must invest in kids. This message was reinforced from both sides of the aisle by Congressman Joe Kennedy (D) and Senator Roy Blunt (R) and Congresswoman Ann Kuster (D).

The advocates all came together in their commitment to the idea that further investments need to be made in early childhood education in the U.S., and more humanitarian support is needed for children around the world, where nearly one in five children live in areas affected by armed conflict and war.

Nanette, a long-time teacher from western Tennessee, had never spoken to a political candidate or attended a campaign event until last year. But as an early reading specialist, she knew how critically important early learning opportunities are for a child’s future success in school and life. So she set out last summer to talk to every candidate running for governor of Tennessee, as well as the state’s open Congressional seats. She did just that, asking pointed questions about early learning at more than 25 campaign events, and organizing her friends and colleagues across the state to do the same. In 2019, the newly-elected Governor of Tennessee, Bill Lee, has prioritized high-quality early childhood education for his transition team, and he directly credits his increased awareness on this issue to Nanette and her fellow SCAN advocates.

Mihir, a high school senior in the Seattle area, is so dedicated to helping kids in the U.S. and around the world get a strong start in life that he donated his summer savings from his tutoring job to Save the Children. As a Student Ambassador for SCAN, he has canvassed for kids' issues at numerous local and state SCAN events, knocking on doors, making calls and starting conversations with voters. Mihir also created a thriving SCAN club at his school, and is always looking for new ways to engage with his peers on behalf of kids.

These are the stories of just two of the hundreds of advocates who raised their voices for kids on Capitol Hill this week, widening the ripple effect of SCAN’s growing grassroots network of nearly 280,000 supporters in all 50 states.

We are grateful for the support of Community Playthings and Johnson & Johnson for supporting our Advocacy Summit again this year.